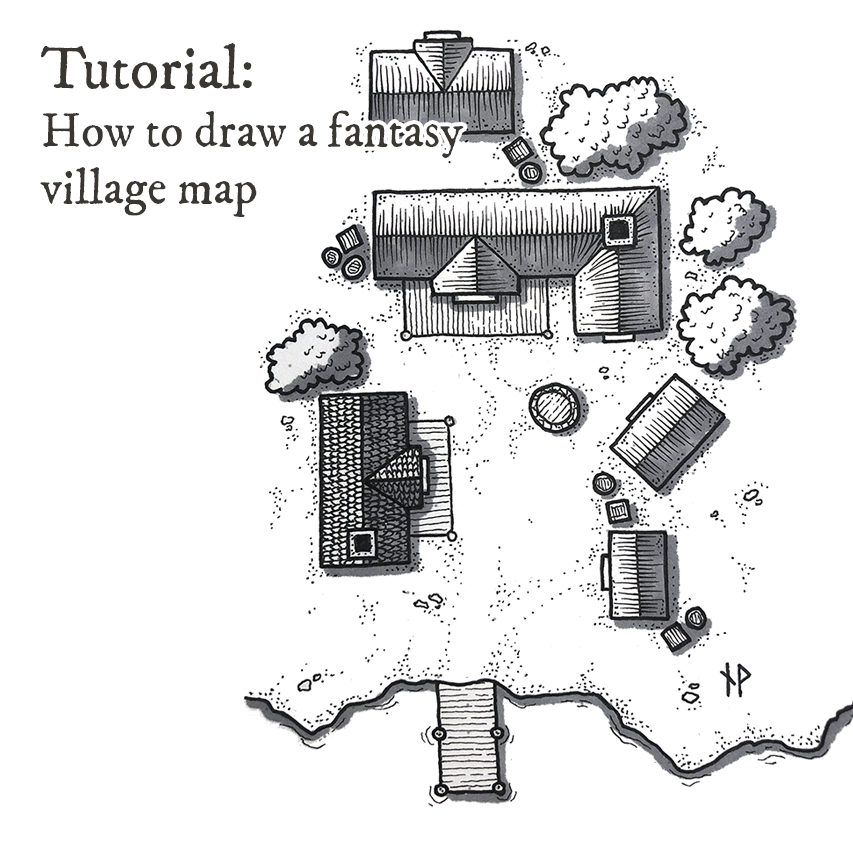 Villages and towns are important places in most fantasy roleplaying games. It’s a place for the adventurers to stock-up on gear before taking off on wilderness or dungeon expeditions, interact with NPC’s, and sometimes the village itself is the main stage of the adventure.

Following up on my tutorials on how to draw basic dungeons and isometric dungeons, I thought it might be useful with a guide on drawing maps of buildings and settlements.

As always, let’s have a look at the tools I will be using for this tutorial:

Start by drawing the rough outlines of your village with a mechanical pencil. In this case, I’m just drawing a small cluster of houses, but if you’re going for a larger village or town, you might want to put some though into if there should be any main roads, village squares or winding alleys you want to include.

Consider some variation of sizes and shapes, to make it look organic and not too monotonous. A settlement grows over time, and not all buildings will be built the same way and for the same purposes. I also like to throw in some small details, like crates and barrels, foliage or trees.

I use a 0.1 Micron marker to re-draw the outlines. I then erase the lines drawn with the mechanical pen. This will damage the inked outlines slightly, but that’s not a problem as we will go over them again in the next step.

Always when drawing maps, you need to think about the balance between making the map easy to understand, and making it realistic or pretty. The doors on my map are obviously exaggerated, but I want to make it clear to whoever is looking at the map where the doors are, since that’s critical information (and to be honest, I think it looks fine).

For this tutorial, I used a 0.3 Micron marker to add weight to some of the outlines. This provide a good, clear contrast when we start adding finer details in the next few steps.

I use a 0.1 marker to add some texture to the thatched roofs. Start by placing the tip of the pen on the ridge, and then draw a quick line towards the edge of the roof. As you move the pen towards the edge of the roof, apply less pressure to make the line thinner at the end. This might need a little bit of practise, so do that on a separate paper. Alternatively, you can skip this technique and just draw normal lines of varying length — that will also look good.

With a 0.05 marker, add finer details, such as roof tiles, wood texture to porches, crates and barrels. Also, since this is a lakeside settlement, I add some wavy lines to the coastline.

Before moving on to shadows, I add some texture to the ground by drawing stones and dots. Since I want the settlement to look organic, I try to make sure there are as little white space as possible. In hindsight, I could probably have added more texture to this map, but it’ll have to do for now — it’s super easy to go back and work a bit more on it.

I add some leaves to the trees/foliage to give them volume and texture.

In this step I use my grey Promarker to add shadows to the map. I’ve decided that the light should come from the top left corner, meaning that roof angles sloping towards the lower and right parts of the map should have shadows (as well as on the ground to the south and east of objects with height (such as buildings, crates and trees).

I also add a shadow to the coastline, to make it pop out more.

I use Photoshop to work with the levels, and getting the colors right, also removing some of the dots.

And that’s it! You have just drawn a map over a small settlement in your campaign world! I hope you enjoyed this tutorial, and found it helpful

28 thoughts on “Tutorial: how to draw a fantasy village map”