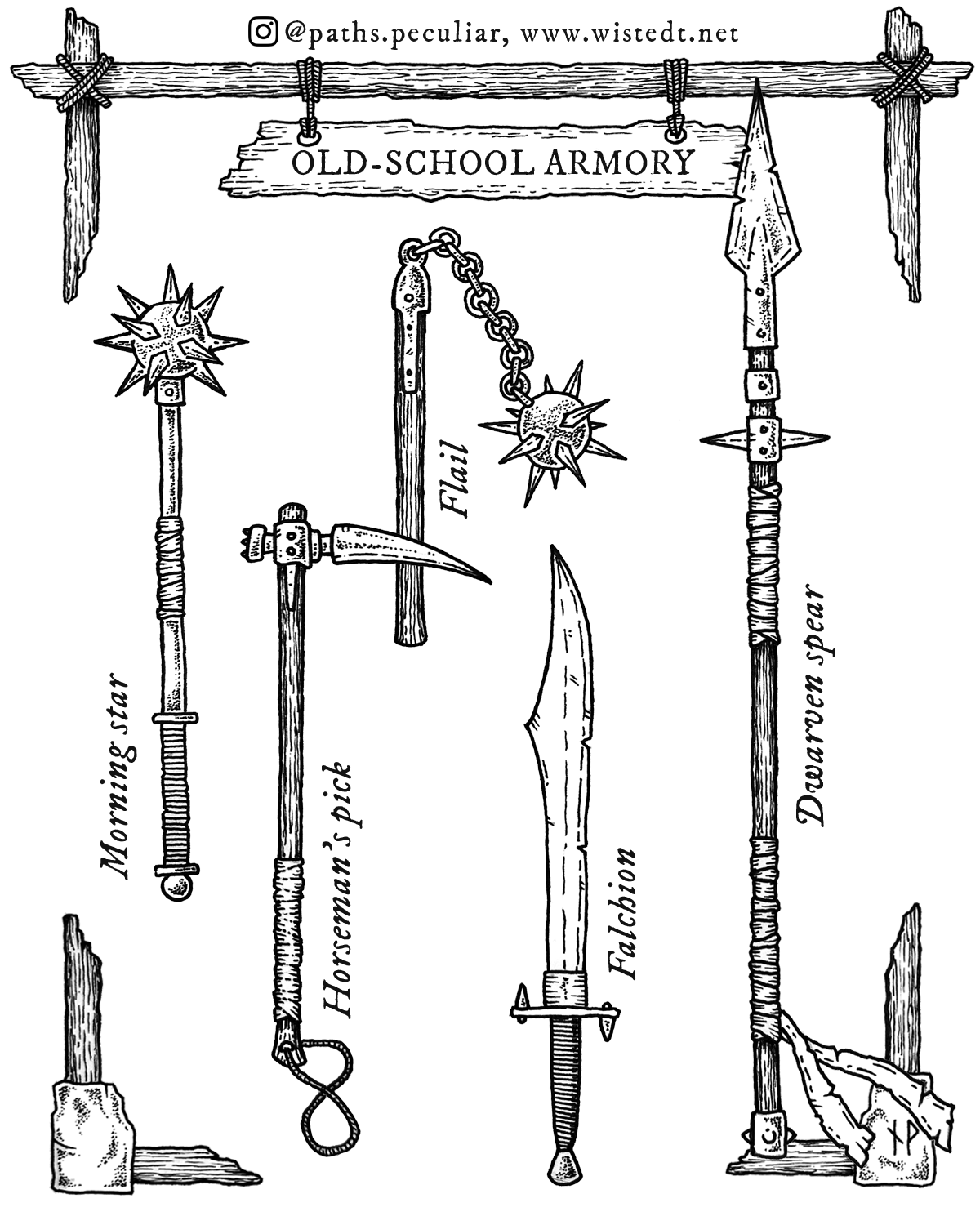 I wanted to expand on the Old-school Armory with some weapons that are not in the original Basic/Expert edition of Dungeons & Dragons. The purpose of this illustration is to provide the Dungeon Master with some more visuals for popular medieval melee weapons to provide extra flavor to their campaign. Feel free to add suitable stats!

Here’s a version of the drawing that is suitable for print (click image for full size):

As a little bonus, I’m adding a drawing of some grisly, primitive looking weapons. These instruments of war would be suitable for barbarians, goblinoids or orcs. Ghastly things!

Support my work – buy me a beer (if you want)

If you like my stuff and want to give me a tip to cheer me on, please click the button below.

Please note that tipping is appreciated, but not expected. Don’t donate if you’re short on cash, I’m sharing content because I like to, not to make money. 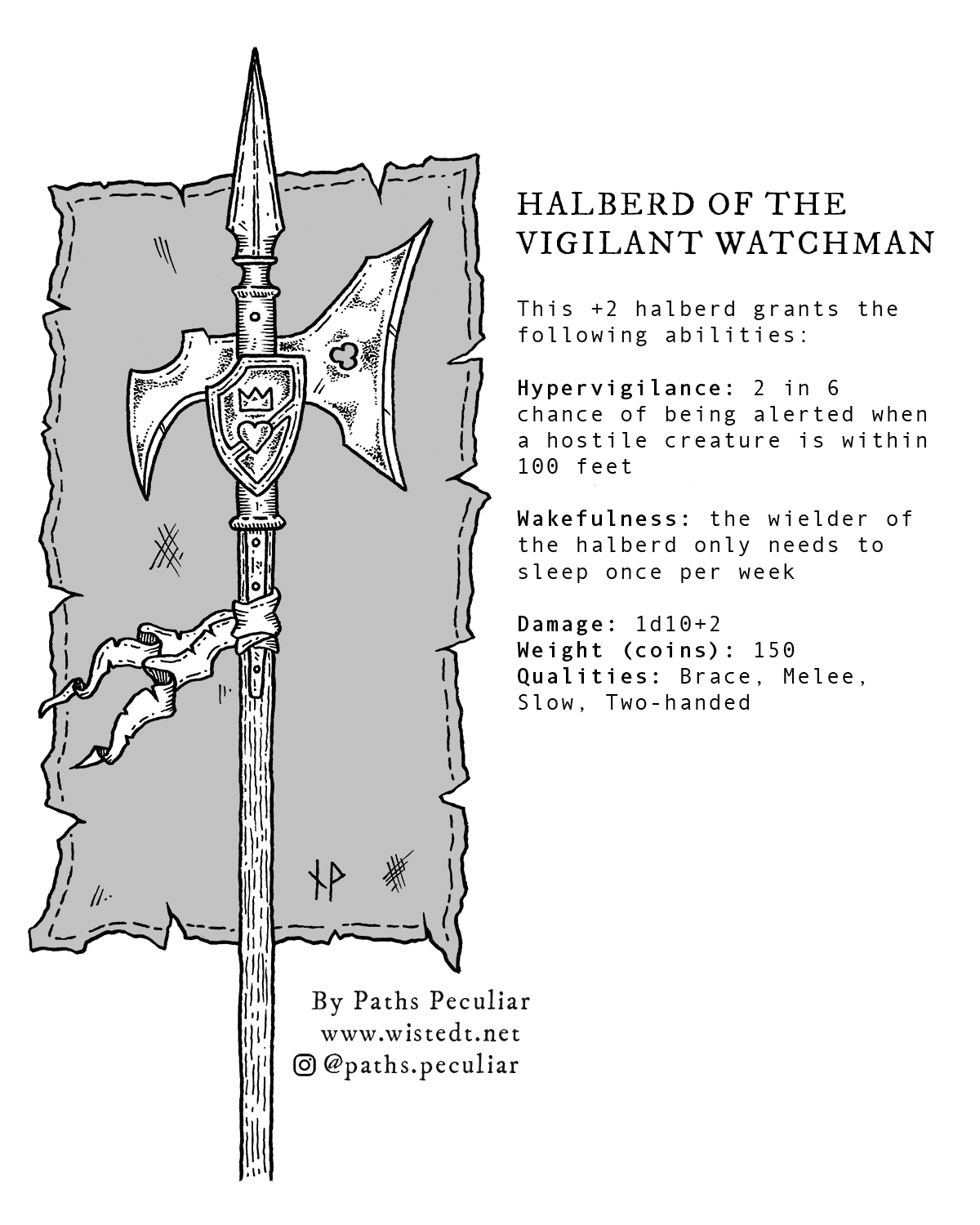 Most vigilant among the King’s guardsmen was Ernest Spudfield. His watchful gaze was unmatched, and his loyalty was fierce. Three times he thwarted attempts on the King’s life, and three times he refused to be knighted for his service. Ernest was a humble man who cared little for fame and glory: all he wanted in life was to keep watch.

The king asked the dwarves to craft a masterwork halberd and on it mount the royal seal, and so they did. The Queen tied her scarlet ribbon to the halberd’s shaft. All knights of the realm cut their palms on the weapon’s edge to acknowledge it as well as the man who wielded it as the prime protector of the royal family.

And so it was presented to Ernest Spudfield who gracefully accepted the reward. He carried it for the rest of his life, and over the decades of service his zeal was infused into the halberd. At his death the weapon had become magical, even though no wizard had ever touched it.

This +2 halberd grants the following abilities:

Hypervigilance: 2 in 6 chance of being alerted when a hostile creature is within 100 feet

Wakefulness: the wielder of the halberd only needs to sleep once per week 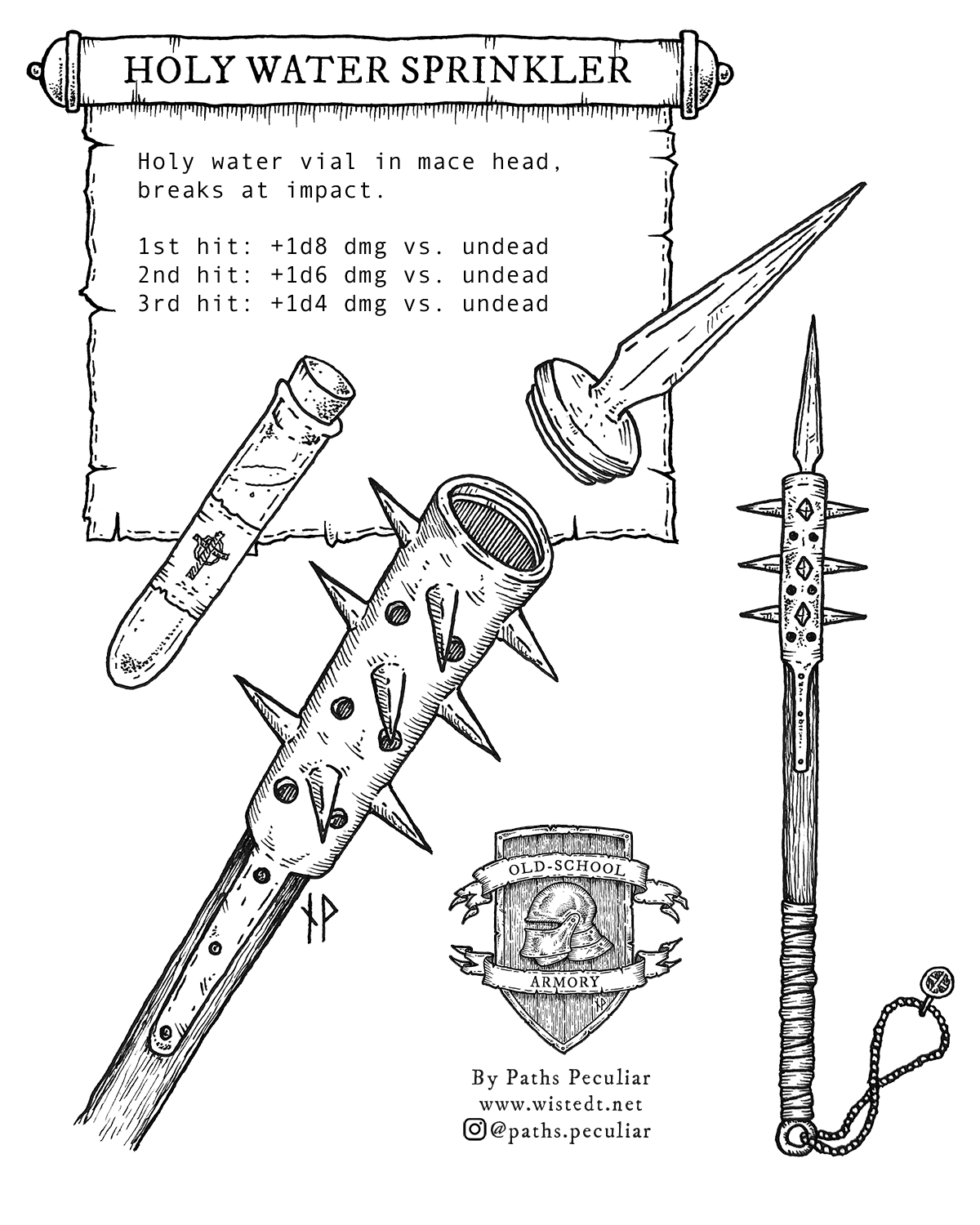 The holy water sprinkler is a mace-like weapon that can be used to sprinkle holy water when fighting undead monsters like zombies, vampires and ghouls.

In real medieval times there existed a mace-like weapon called the “holy water sprinkler” because of it’s resemblance to the aspergillum used in the Catholic Mass. It was of course just a club, but I wanted to pursue the concept a bit further (although I’m sure I’m not the first one to think of this).

This fantasy version of the holy water sprinkler has a hollow mace head with a screw-on lid. It can be loaded with a vial of holy water that breaks on impact, splashing (or rather sprinkling) holy water on the target.

One vial contains enough water for three strikes, however it will deal a little less extra damage for each hit as the water is dispersed (1d8/1d6/1d4). Base damage for the weapon is the same as a mace (1d6 in B/X). Reload time is three rounds.

This is obviously the perfect weapon for anyone on the hunt for the undead. It even comes complete with a zombie-dispatching brain-spike on the top! 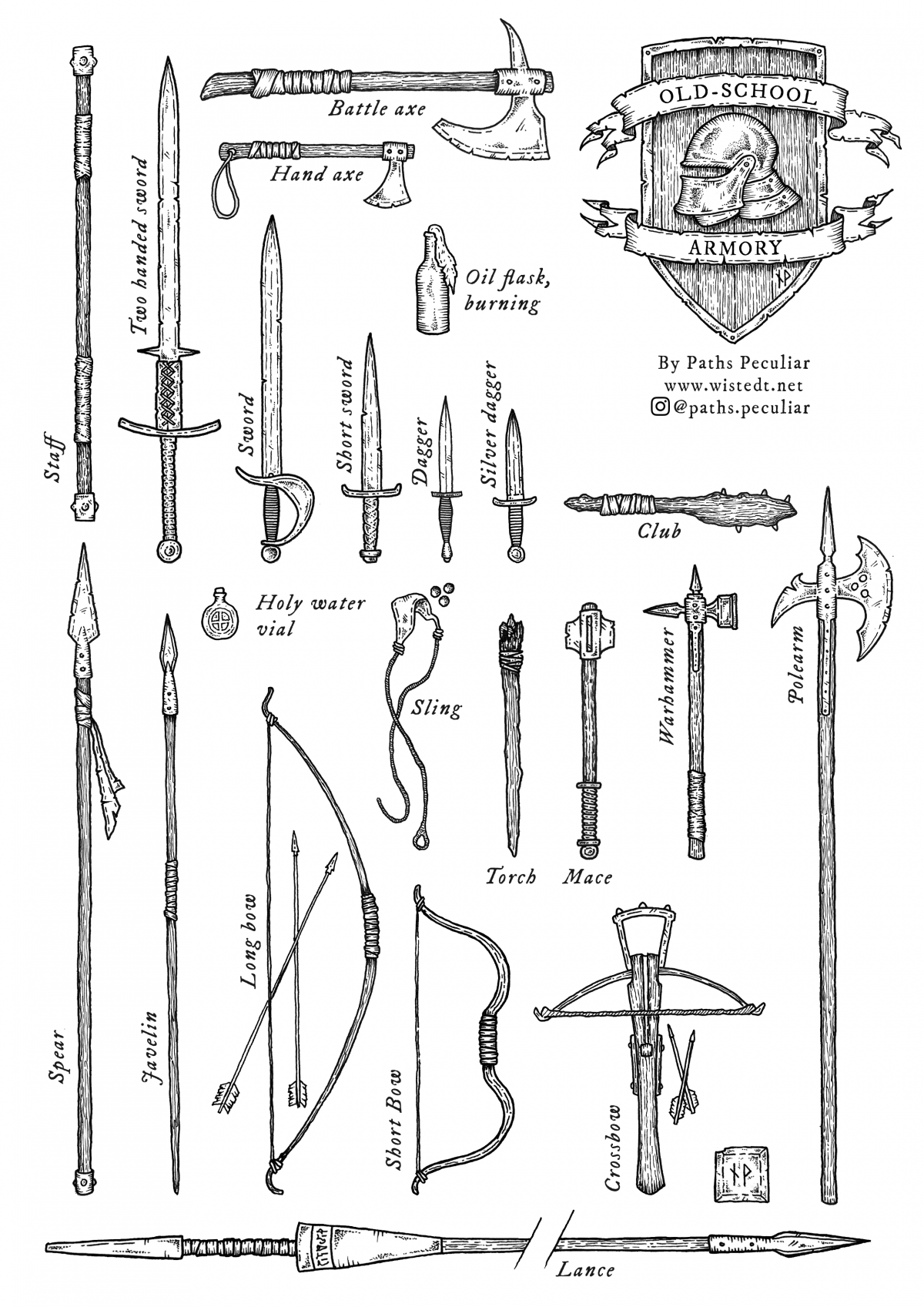 For some reason I’ve never outgrown weapon illustrations in roleplaying games. As a youngling I usually flipped right to the equipment chapter when picking up a new game, fantasizing about gearing up for adventure.

Some of the early versions of D&D (as well as some of it’s modern clones) sadly lack weapon illustrations. Therefore I took it upon me to hand-draw a chart for dungeon masters to print and hand out to their players.

I hope you will enjoy this onepager, illustrating all the weapons in the equipment list of D&D B/X, released in 1981. Of course it should serve as inspiration for any quasi-medieval fantasy roleplaying game. I myself intend to use it for Old-School Essentials which is an amazing B/X close.

Do you want more of this?

For more weapons, check out the expanded Old-School Armory for weapons like the flail and morningstar.

Let me be very clear: the content on this website is free for personal use, and it will stay that way. That said, I sometimes get questions if there’s any way to support my work. If you insist on giving me a tip my Ko-Fi account is ko-fi.com/pathspeculiar This will make me very happy, but is not expected!

Just a little sneak peek at what I’m currently w

I just realized I missed updating the website with

I sometimes get questions if it's possible to supp

A small spot illustration of an Underdark settleme

Just a small ”dungeon hex” that I might use fo

A throwback to one of my favorite monsters I’ve

Do you need a short fantasy/horror adventure for y

Cleaned up version of the crypt map for ”The Spu

Working on something for you guys. Free dungeon ad