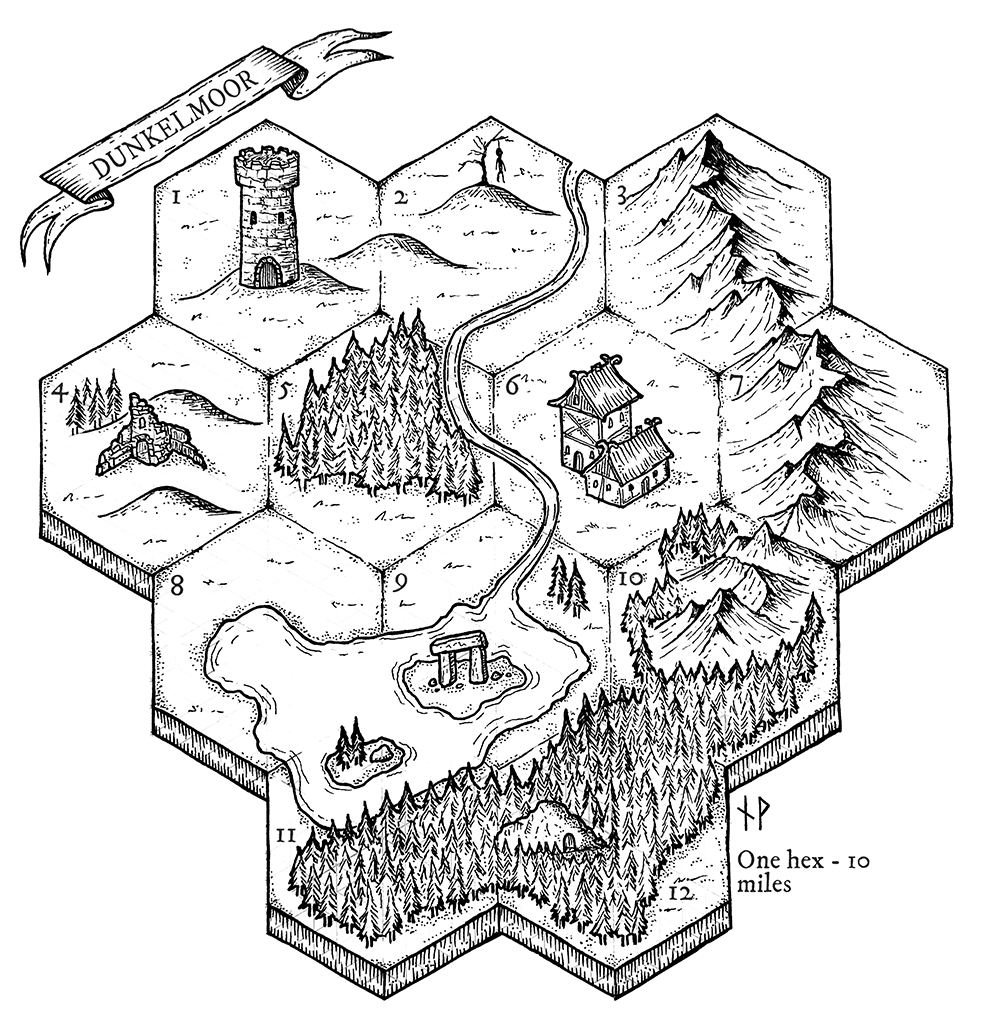 Dunkelmoor is a campaign environment written for fantasy roleplaying games. It is fairly subtle, you will find no dragons here, making it suitable for low-to-mid-level adventures.

Suggestion for adventure music: Mortiis – Crypt of the Wizard.

Not many people live in Dunkelmoor. It’s not that it’s a particularly bad place to live in – there are definitely worse places in the kingdom. It’s just that it’s a bit “off”. Most people don’t really know Dunklemoor exists, and the ones that do tend to forget about it.

Dunkelmoor is a bit gloomy, and some parts of it is outright spooky. But there are also beautiful places, like the lush Pigwood and crystal clear Blacklake. Evil broods in the woods to the south, but seem to be contained there (at least for now), so the few inhabitants of the only village live their lives like they always have. They are quite content.

The climate is similar to the middle parts of Sweden. Four seasons, winter is quite cold.

Hidden treasure as well as forgotten knowledge exists in several locations of Dunkelmoor.

Dunkelmoor is a forgotten corner of the kingdom. The people here mind their own business, far away from the gaze of the nearest baron (he has literally forgotten about his legal claim to the land). They don’t mind, as no lord means no taxes. Their lives are humble, and very few Dunkelmoorers ever travel further than the edges of this map.

Hex 1 – The Tower of the Missing Knight

A few years ago, the knight who was appointed to govern Dunkelmoor dissapeared together with his retinue when out questing. The servants of the tower waited for a few months, before abandoning it, returning to their families in the north. The servants took what valuables they could find, but there are still treasures hidden here. The most valuable one is a blessed relic hidden in a secret compartment in the knight’s bedchambers (the finger of Saint Erebus).

Records found in the tower reveal that the knight and his retinue (his squire and five men-at-arms) travelled to the southern woods, but never came back. No search party was dispatched.

It is not a tall tower, but it has underground levels worth exploring.

Although no one have been executed in Dunkelmoor for decades, this place is still known as the the Gallow Hills. The knight in charge of Dunkelmoor fifty years ago was a draconic ruler, who hanged people for the pettiest of crimes. Therefore many men and women has ended their lives on these hills. Some of them are still haunting this bleak area.

A ghoul has its lair in this hex. It is likely to attack anyone setting up camp and spending the night here. The ghoul has some treasure stashed away in its lair, including a cursed dagger.

These mountains are, like the ones in hex 7, steep and very hard to climb even under good weather conditions. Where hex 3 meets hex 7, there is a mountain pass where one can travel east on foot (although the terrain is too hard for normal horses to travel in).

There are several natural caves in the mountains, a few of them lairs to monsters. The most dangerous monster is a white, ape-like brute. Some caves run deep into the underdark of the world.

An old monastery is situated on a hill on the moor. The monks left longer ago than any Dunkelmoorer can remember, nor does anyone know why. The ground level of the monastery is little more than an overgrown rubble, however there are plenty of underground catacombs where an adventurer could possibly search for ancient tomes and parchments (most of which has decomposed long ago). There are some sealed areas in the catacombs, that has not been explored by anyone.

Many wild boars live in Pigwood, hence the name. It is also a fairly safe forest, at least during the day (no Dunkelmoorer would be foolish enough to spend the night in any forest). People go here to hunt, forage (there are plenty of mushrooms!) or do a little bit of logging.

The most dangerous creature in Pigwood is the enormous boar matriarch, nicknamed “Bertha” by the hunters. She weighs close to a thousand pounds and is extremely territorial. Everyone stays away from her.

A few benevolent fey live in Pigwood, they usually stay close to a crystal clear pond in the middle of the forest.

The village of Dunkelmoor is small, and consists of a gathering of twenty-seven houses. It does not have a wall, but the villagers have been working on building a wooden palisade for some time.

The villagers are a bit withdrawn, but friendly. They live a fairly decent life in Dunkelmoor, with an abundance of fish in the river and plenty of game in the Pigwood. Every month or so, keelboats arrive from the north with merchants trading grain and potatoes for salted fish and pork.

There is a small inn called “The Hearth” which is the natural meeting place. The inn has two rooms for rent, although they are rarely used, since few people from the outside world visits the village.

Dunkelmoor village is a safe place, and provides a good base to rest and stock up on gear (however, few people in the village has need for, nor money to buy treasures brought here by adventurers). There is a blacksmith, and a general goods store.

The village leader is a gray-haired woman called Elsbetha. She leads a council of four, the other three members being the blacksmith Grun, the innkeeper Beata and the (only) lawman Oscar.

The peaks of the mountains are rich with visible silver ore that reflects sunlight. On sunny days they shine brightly, lending the mountains their nickname. However, the mountains are way too tall and steep for anyone to manage a mining operation, and no one has tried in fifty years.

Many mountain goats live on the slopes, as well as several large, silver-furred mountain lions that hunt the goats. The lions are quite intelligent, and their matriarch can speak broken common. They generally avoid humans, but could possibly be negotiated with.

In the northernmost part of the hex, there is a mountain pass where one can travel east on foot (although the terrain is too hard for normal horses to travel in).

The western shore of Blacklake is rocky, and has many great fishing spots for perch. It is also a favorite spot for birds such as herons, mallards and common coot.

This is a nice place. No monsters. Let the adventurers rest and do some fishing.

This part of Blacklake is very deep. Fishing is quite good, especially for large pikes.

The island is called Temple Island by the Dunkelmoorers. There is an old, altar-like arrangement of stones on it, and people go here on new year’s eve to light fires and pray for protection from evil spirits. It is not mere supersticion, the stones are actually divine in nature, and the prayers charge the monument, allowing it to protect the village of Dunkelmoor from the infernal beings in the woods to the south

A tribe of thirty (give or take) goblins live in a lair in the mountains of this hex. They are cowardly, but might attack if they believe they would be able to surprise and severly outnumber their opponents. They are currently led by One-eyed Jack, the finger biter – a human that was kidnapped as a child by the goblins. He can be both bought (with silver) or bullied (by show of force). Jack and the goblins know much about the cave systems in the mountains of hexes 3, 7 and 10.

In a hut on a Blacklake island lives the old hermit Agnes. She is quite kooky, but kind. She does not mind company and rows her boat to Dunkelmoor Village twice a year to get drunk at the inn.

Agnes looks frail, but she is a 6th level fighter. She knows a little about the Kandarian Knight in hex 12, and will advice adventurers not to go there or to the woods in hex 11. The vile retinue and the knight is unable to set foot on her island due to several protective runstones carved and erected by the hermit.

The woods in this hex are of similar characteristics as in hex 12.

This is where the missing knight went on his quest. He found an old, sealed tomb in a hill. As he broke the seal and entered the tomb, he was posessed by a Kandarian demon – an ancient infernal spirit of the woods. He slew his retinue in ways most abominable, and brought them back to unlife as insidious fiends that now haunt the woods in hex 11 and 12. The vile retinue is intelligent, quick, stealthy and sadistic. The retinue consists of six wights. They will bring any prey they catch to the Kandarian Knight who spends most of his time brooding in the tomb.

If the Kandarian Knight is slain, the demon will attempt (and likely succeed) to possess another living human being, likely the bane of the knight. Divine magic will be needed to fight this foe. Records of such spells can be found in a hidden, underground chamber of the cloister ruins in hex 4, as well as descriptions of how the demon was once imprisoned some four hundred years ago.

This is not a nice part of the forest. It was dark and spooky even before the Kandarian demon was set loose, and more so now. There is little in terms of animal life in the forrest, save scores of insects – most notably a species of large, gray-black moths. It is hard to travel due to excessive undergrowth.

And that’s it! I hope you and your players will enjoy adventuring in Dunklemoor. Please leave any feedback you might have in the comments.

11 thoughts on “Adventures in Dunkelmoor”