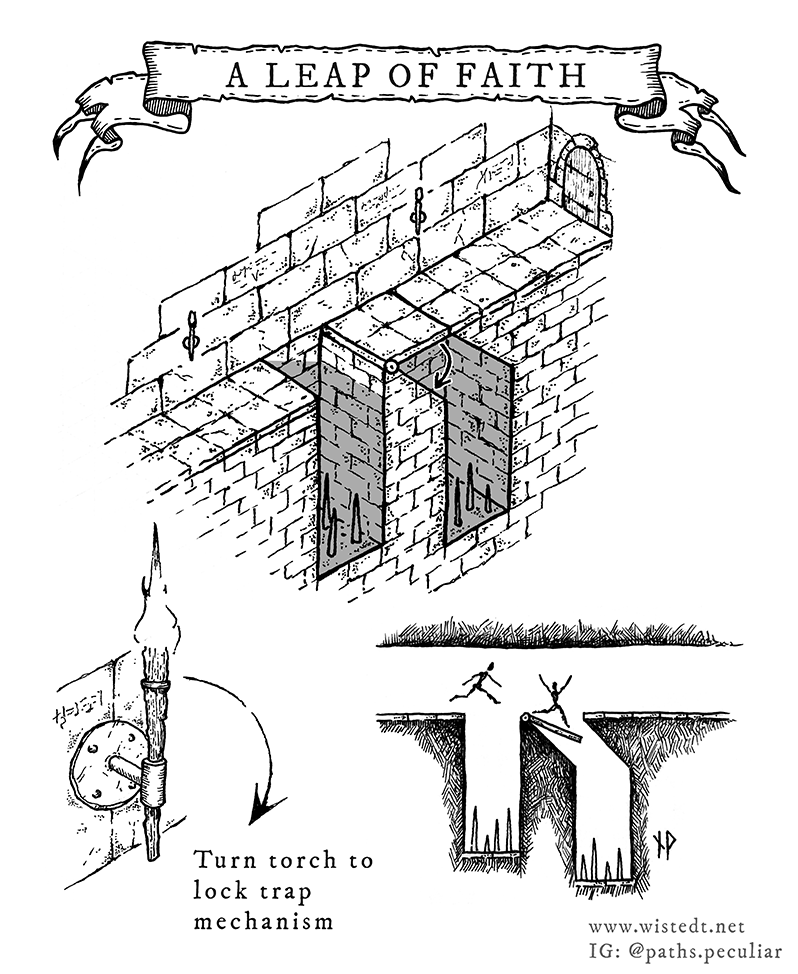 Yet another unfair and deadly dungeon trap to make your players hate you. The “Leap of Faith” trap consists of two pits with spiked floors. The first one is easily spotted and likewise easy to jump over unless you are encumbered or wearing heavy armor.

The other pit, however, is more sinister as it is covered by a trapdoor that is activated by pressure. Jumping over the first pit and landing on the other side will therefore trigger a nasty surprise.

The mechanism of the trapdoor can be locked by turning any of the two torches 45 degrees clockwise. This is apparent for a character examining the torch holders. Turning the torch will temporarily deactivate the trapdoor and make it safe to stand on for one turn (10 minutes) as the torch slowly moves back to its upright position. The trapdoor mechanism makes a sound when the torch is turned. The characters may hear this sound if the party is otherwise quiet. The mechanic sound could give a careful party a hint about the trap.

The Dungeon Master should probably place some treasure at the bottom of the covered pit trap. Perhaps the remains and equipment of a not-so-lucky thief?

A word of warning on traps in roleplaying games

Keep in mind that some of the traps like this one and the rolling boulder trap will almost certainly kill characters that walk into them. You might want to consider the experience level of your players (players, not characters) before implementing them into your own dungeon adventures.

Players experienced in old-school dungeoneering are usually careful when exploring. They have a decent chance to find or forebode the traps. OSR games (Old School Reinassance, clones of early eighties D&D) ususally doesn’t have rules for spotting or avoiding traps, but relies on the players figuring it out.

Less experienced players, or players used to later versions of D&D, might find such traps extremely unfair and get turned off if their characters die an instant, gruesome death.

To tone down the difficulty of this trap, you as a Dungeon Master can choose to: