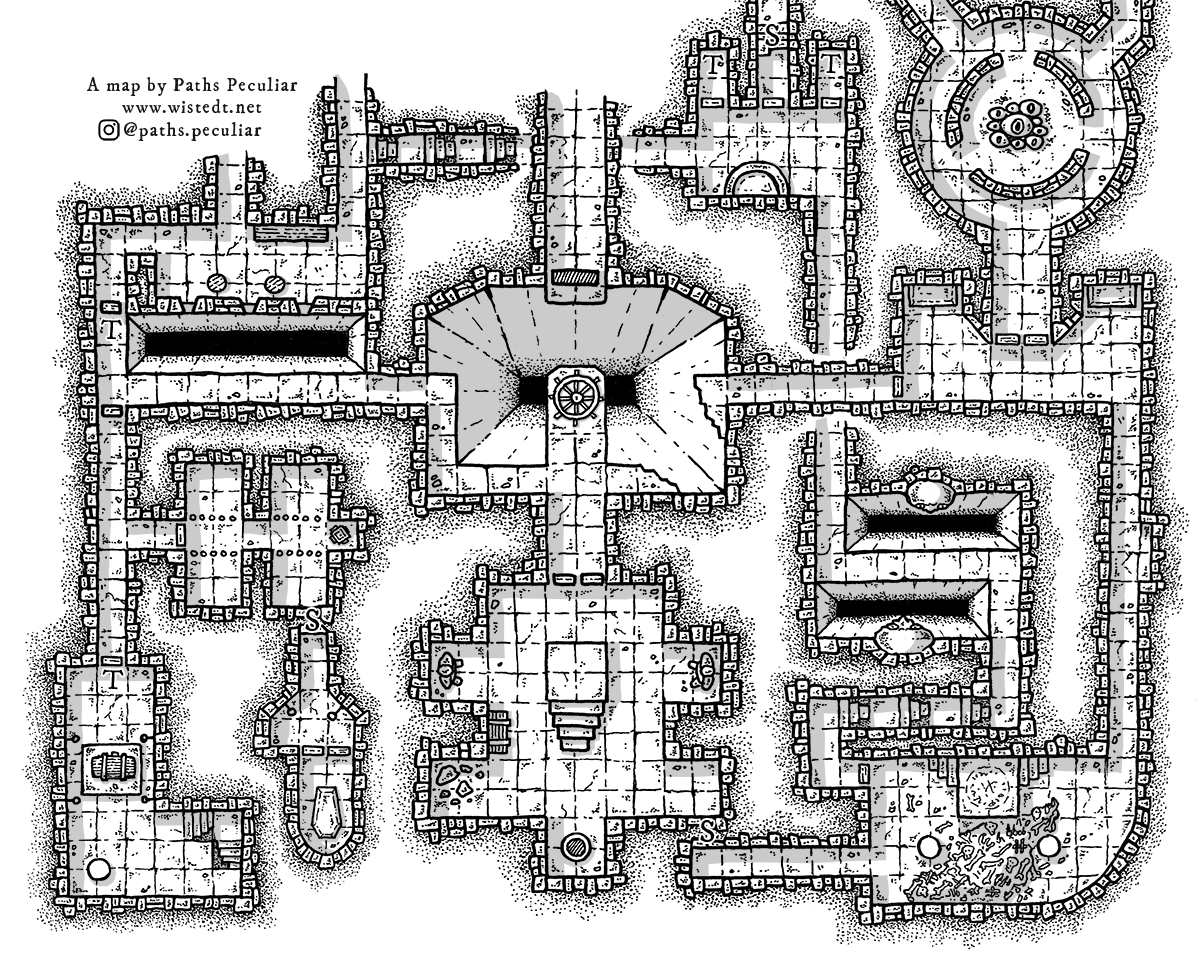 Sometimes when I post my dungeon maps online I get angry comments pointing out design elements that “doesn’t make sense” because they don’t serve a practical purpose. Such elements can be anything from a simple alcove to a corridor dead-end or more fantastic features such as a bottomless pit or a unpractical trap. The people protesting these elements claim things should be constructed with a clear, practical purpose or it doesn’t make sense and breaks the immersion of the game.

But does everything in a dungeon need to serve a practical purpose? No, it certainly does not.

What is a dungeon?

I will be discussing “dungeons” in a fantasy context like Dungeons & Dragons or sword & sorcery litterature. In this context the dungeon concept is not limited to the prison-pits of medieval and renaissance Europe (although a prison could certainly have non-practical features).

In this broader definition a dungeon can be any type of confined space where the adventure takes place, such as:

Why do we build?

Humans have always created things with little or no practical purpose. We do it because we are visual, creative and curious creatures. While we are amazing at creating practical things like the wheel and the nuclear power plant we are also driven by aesthetics and curiosity. This heavily influences the way we craft things. We construct a fully functional fighter plane, but still feel the need to paint shark teeth nose art even though it doesn’t affect the functionality of the plane.

Sometimes we build things just to see if we can. We do it it to prove our exceptional skill and to instill awe. The Statue of Liberty was useless as a lighthouse, but a wonder of engineering and still one of the most famous and beloved landmarks on the planet. Does it serve a practical purpose? Not really. Does it make sense? Yes, to a human it does.

This is not something new. There are cave paintings more than 40 000 years old that likely served no other purpose than decoration or religious expression. Medieval castles were certainly built with a practical purpose in mind, but they are still fitted with decorative and extravagant features – things of beauty and pride. Quite often humans do things just to show off.

The folly of architecture

There’s even a word for this: folly. A folly is a structure, often eccentric in nature, that serves no other purpose than decoration. Like a Roman ruin built in 18th century England or a “Chinese” pavilion in a Swedish palace park. It’s basically a very expensive conversation piece. Another example is the classic garden maze.

And sometimes we fail. Sometimes we build things in a certain way just because we didn’t know better. Not all architects are good at what they do. History is filled with examples of unsuccesful construction. It’s easy to say in hindsight that such a construction element “makes no sense” – but it did to the ones that built it.

In short: while we build things to serve practical purposes we also build for the sake of beauty, curisosity, awe, narcissism, vanity, superstition, faith, love, hate and … folly.

Considering the above not everything in a dungeon needs to “make sense”. While there need to be some balance – everything should probably not be silly – adding decoration or eccentric design features makes the dungeon more interesting to explore. It makes for a better game.

An insane (but powerful) necromancer has his minions create a dark underground palace. Would it really be so far-fetched that his megalomaniacal ego would shape the construction of such a site? Does it not make sense that he will create traps that are overly sadistical in nature even if the typical nature of a trap is to deal out instant death? What would his idea of “beauty” be? Probably different than most.

A rich and decadent nobleman builds a castle. Would it not be possible that he’d spend his gold on a folly labyrinth just to show off for his guests? And with all gold spent on the folly, the construction of the rest of the castle took an abrupt end leaving several corridors in dead ends.

When an obscure cult build their temple, their leader gets a vision telling him the ceilings of the inner sanctum may not be taller than five feet. Ridiculous, of course, but people in the real world have come up with stranger religious dogma than that.

When you design your dungeon, keep this in mind:

You don’t have to be able to explain everything in a dungeon. People will sometimes build for shits and giggles. If you come up with something cool that you can’t explain – leave it in. There’s a good chance the imaginary dungeon builder did it just for the hell of it. Maybe she had a good reason which is now lost. Who knows? The best dungeon is the one with a mix of practical, predictable elements and elements of art and mystery.

4 thoughts on “Dungeon design tips: the balance between flair and function”