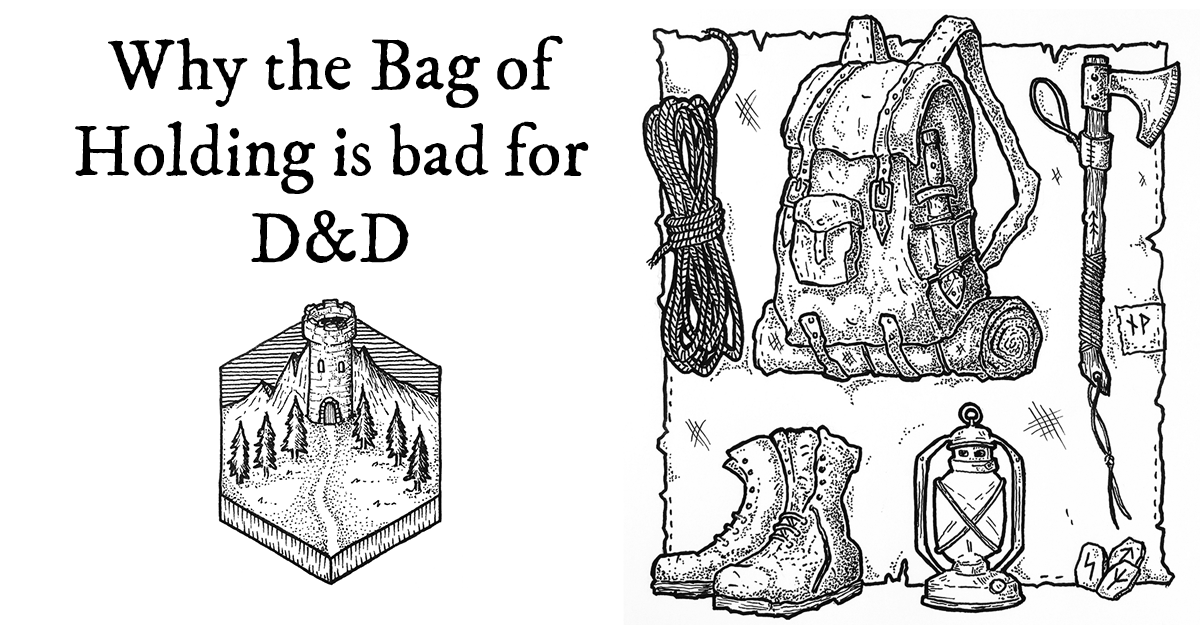 Please excuse the provocative title, but I would like to talk a little about why I think the Bag of Holding is an item that’s better left out of your Dungeons & Dragons campaign.

What is a Bag of Holding?

The Bag of Holding is a magic item that exists in most (all?) editions of D&D, as well as most clones (like Pathfinder and OSR games). It is basically an enchanted bag with an interior considerably larger than it’s outer dimensions. It is used to store treasure and equipment that would otherwise be too cumbersome for the player characters to carry.

Below is how the Bag of Holding is described in D&D Basic/Expert from 1981. Note that in those older editions weight was defined in coins. 10 coins were equal to one pound, so this Bag of Holding can fit items with a combined weight of 1000 pounds. (source: Old-School Essentials System Reference Document):

The modern version of the Bag of Holding (D&D 5th edition) is more or less identical to the B/X one, but carries “only” 500 pounds of weight.

What purpose does the Bag of Holding serve?

In short: the Bag of Holding lets player characters carry much more items than they would normally be able to. This is of course extremely useful for a bunch of semi-medieval adventurers in a fantasy world. Players are happy because their characters can bring more equipment and salavage more treasure. The dungeon master is happy because he doesn’t need to bother with rules for tracking encumbrance.

Why the Bag is Bad.

So, why is this a bad thing?

Well, it’s not bad per se. If you want to run a superhero style D&D campaign, where characters are larger than life then it’s fine to not track mundane mechanics such as encumbrance. But then again – why not just ignore it completely? You don’t need the Bag of Holding as an excuse to remove encumbrance from your game. Just assume the characters somehow manages to carry everything they want.

But to me D&D isn’t a game of superheroes and epic encounters. To me D&D is a game about heroic burglary and expedition style adventures. I would argue that most older editions of the game support my approach. Others would argue that later editions are built for something very different. Both viewpoints would probably be correct.

If you want to play D&D the way I prefer, then mundane choices become important. The Bag of Holding removes those choices from the game. It makes them irrelevant, and that is why it’s bad.

Expedition style burglary adventures are all about prioritizing. When encumbrance is a factor the party need to somehow decide what to bring on their journey.

By having to make all these choices the game becomes richer. Already in “town” the players need to start planning their venture. They benefit greatly by gathering information about the adventure location as such information can help them prioritize. Without a Bag of Holding these are hard choices! With a Bag of Holding they can just buy up the whole inventory of the store and they’re all set. There are no choices to make except for possibly financial ones.

A game of burglary

D&D is a game of burglary. It’s about reaching hard to reach places, and enter dangerous sites to find treasure and get out alive. This presents important choices. Treasure weighs – often a lot. If the players have a Bag of Holding they can just grab whatever they find and stuff it. If they don’t – well that’s another story. The 200 pound statue looks valuable, but is it worth the effort? Salvaging a chest full of coins is a feat of it’s own. Even if you manage to get it out of the dungeon you might not be able to bring it back to town without assistance. Perhaps better bury it somewhere where X marks the spot.

Being encumbered is risky, especially in old-school D&D where combat is dangerous. An encumbered character is putting his or her life at risk should a hasty retreat become necessary. When danger lurks around the corner you want to make sure you’re able to run. Having to leave treasure behind is an excruciating decision to make, but an important lesson can be learnt here: next time make sure to bring hirelings on your expedition.

All these decision makes the game richer in my opinion. What the Bag of Holding does is to remove such dilemma, and that’s why I think it’s bad.

Edit 2020-10-11: this has made some people angry. That’s fine, there’s no reason to agree for the sake of agreeing and everyone plays the game the way they want. Some of the angry readers have accused me of being a boring DM for taking the mundane into consideration when playing D&D. And while they might be right about me being boring (I hope not, but I’m not the right person to say) I’d like to write just a few words about why I think the mundane has an important place in my campaign:

The tension between the mundane and the fantastic

A lot of people roll their eyes over mundane things like encumbrance mechanics in D&D. To me such things are important to set the right tone in the game. It’s not about “high” or “low” fantasy. It’s about tension between the mundane and the fantastic.

To me fantastic genres like fantasy, horror and sci-fi is at it’s most captivating when the mundane encounters the fantastic. It is the contrast between those two realms that creates tension and awe.

If your character is a flying half-demon that shoots laser from his arse then few things in a fantasy world will feel very fantastic. Finding a magical item will be convinient, but never awe-inspiring because magic is an everyday commodity.

This is why I prefer human characters and why I think it’s good to count torches and track encumbrance. Because when the characters are rooted in the mundane, encountering something that isn’t is a truly magical experience.

More stuff to browse on the blog: