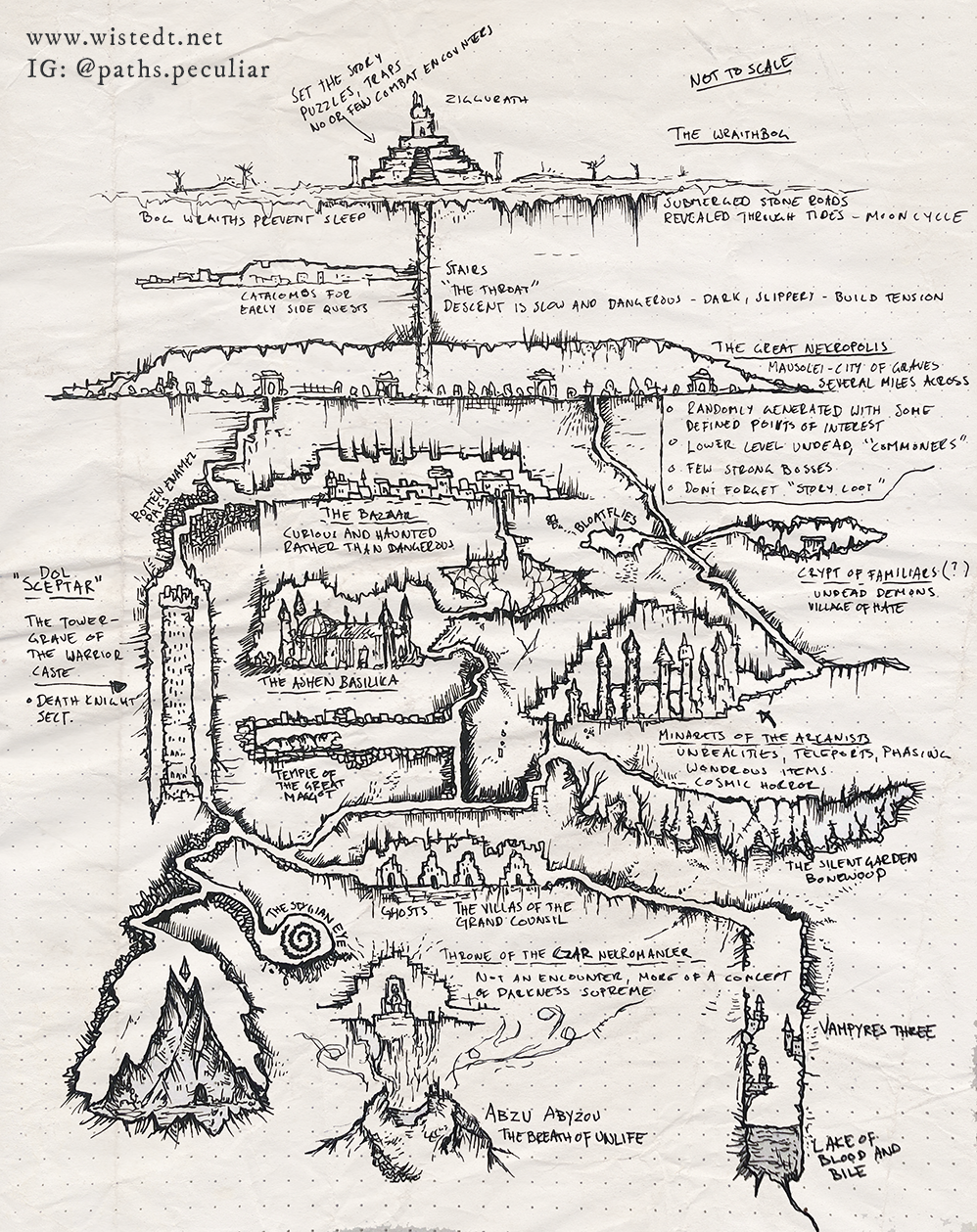 I’m working on some kind of conceptual framework/campaign environment for my fantasy-horror themed dungeon maps. I wanted an environment where maps like Arcane Chambers and SVART GRIFT could be placed without feeling out of context.

The idea is an ancient civilization obsessed with death, digging deep into the earth to reach their dark god, and then committing mass suicide in order to be “blessed” with the breath of undeath. A huge necropolis filled with absolute horrors and blasphemy.

In ancient times, this civilization was flourishing, and its realm was vast, centered on what today is a putrid swamp. Its scholars and magi and warriors were unmatched, and the people were living in prosperity. But the civilization drew to it the attention of the arch-demon ABZU ABYZOU, a necrotic duke of Hell.

Slowly, ABZU ABYZOU mainpulated people of all castes. Initially small cults started to form among the poor, but within decades the demon’s whispers reached the nobles and even the mighty Czar. Worship of the demon came with great rewards for those who submitted themselves, and ABZU ABYZOU demanded little tribute of its followers. At first.

It took several generations before the arch demon decided to take the next step of its plan. Natural disasters struck the lands: storms and drought and great fires. Insect swarms ravaged the fields and villages and even the capital. And the demon whispered salvation into the ears of his followers, and convinced them that they needed to take shelter within the earth itself. So they dug.

An entire civilization relocated from a now barren surface into the sheltering depths of the earth. It was an incredible achievement by its architects and labourers, even considering they got infernal assistance. During the great excavation, the teachings of ABZU ABYZOU became more grim. While the darkness of below might provide shelter, it is not a place for human life. You should bury the dead, not the living. And so slowly the absurdity of undeath became less absurd. After years in the darkness, the people did not only consider unlife, they yearned for it. Anything to relieve the pain and melancholy of a life devoid of the light of the sun, the wind in the branches and the memory of a gentle spring rain. They had become obsessed with the thought of death and dying. It manifested in everything – art, architecture, magic and worship.

They were ready to die, and to rise again immortal.

The night of relief

So came the night of the great turning. A ritual mass suicide orchestrated by the priests of the Ashen Basilika, the Czar Necromancer and the members of the Grand Council. When a bleak sun rose over the Wraithbog, ten thousand ghouls and ghasts rose in the necropolis below it.

This is still just early thoughts, notes and sketches, but thought I should share it so you can follow my trail of ideas from the start.

I will probably not develop this with any specific game system in mind, but needless to say it would fit most OSR-games, or the grim darkness of artpunky MÖRK BORG.

This is not so much a map as a mindmap, and absolutely not to scale!

A simple drawing of the weapon of one of the playe

#throwbackthursday to this creepy, crawly dungeon

New free map! I made the Deepwood Lodge map recent

The map from today’s adventure, the Deepwood Lod

Guys, do you know that I illustrated *all* the wea

Digital editing. I sometimes get questions about h

Isometric paper can be used for a lot more illustr

”Deep in the bowels of this forsaken labyrinth s

”I’m sure nothing bad could ever come from rea