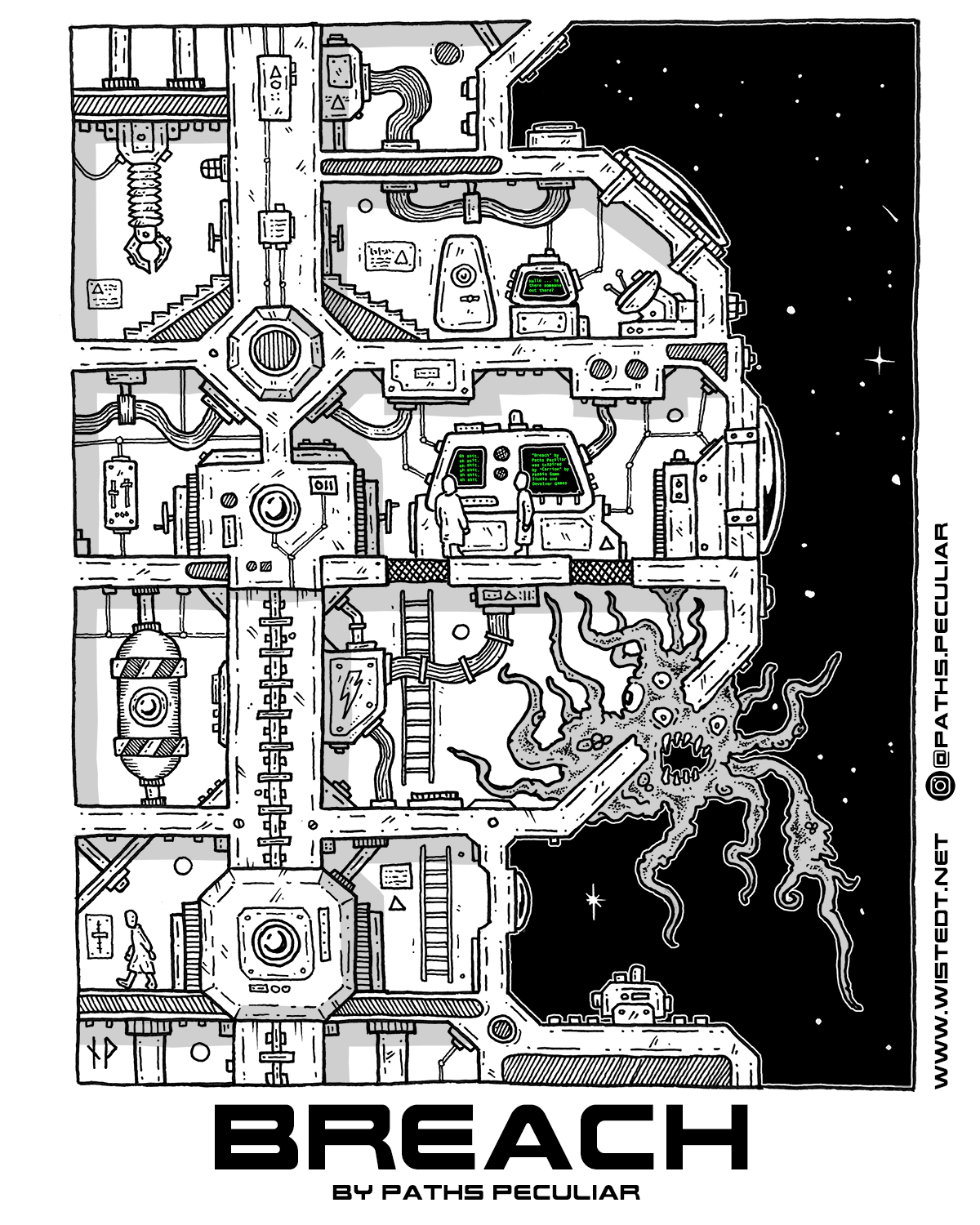 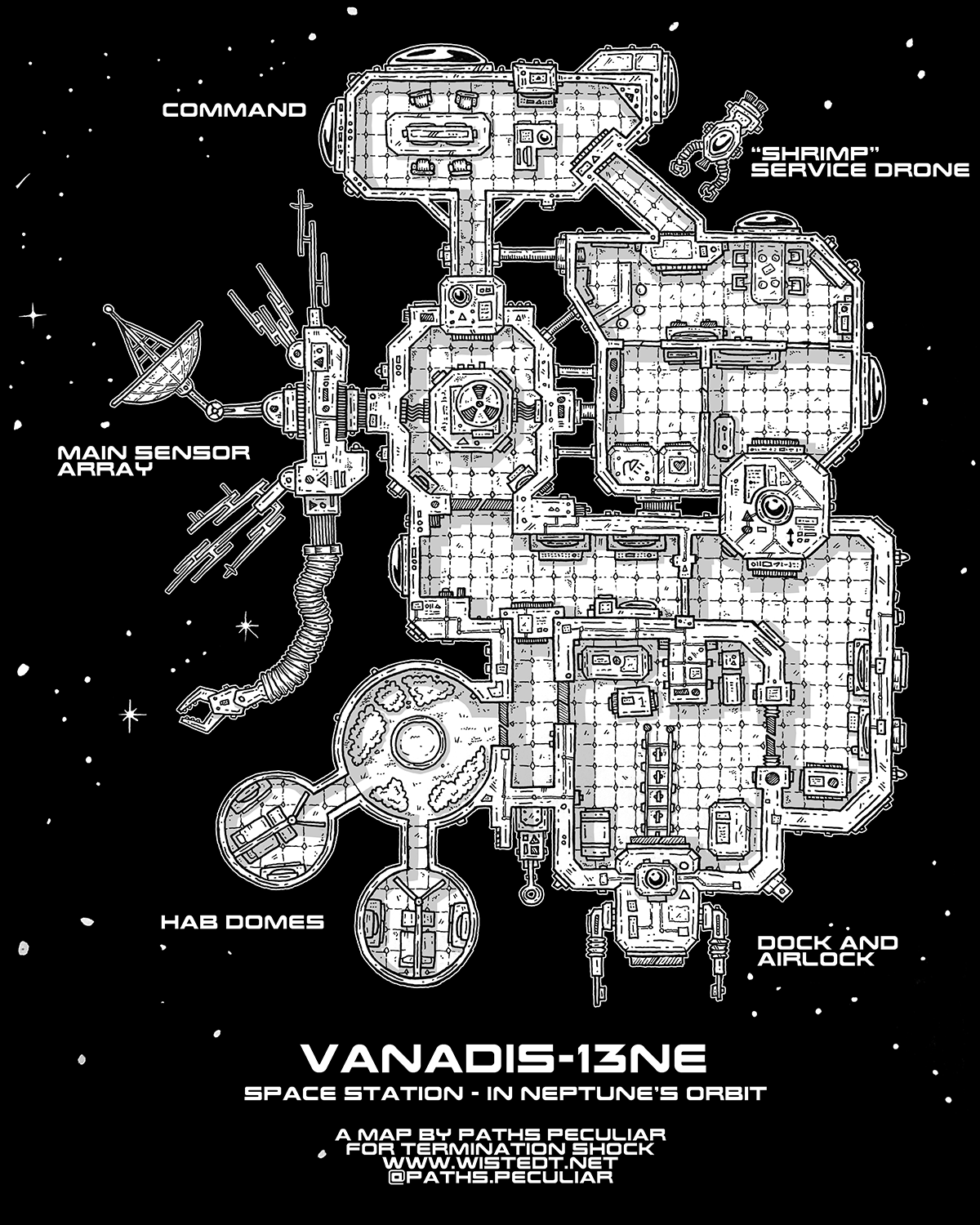 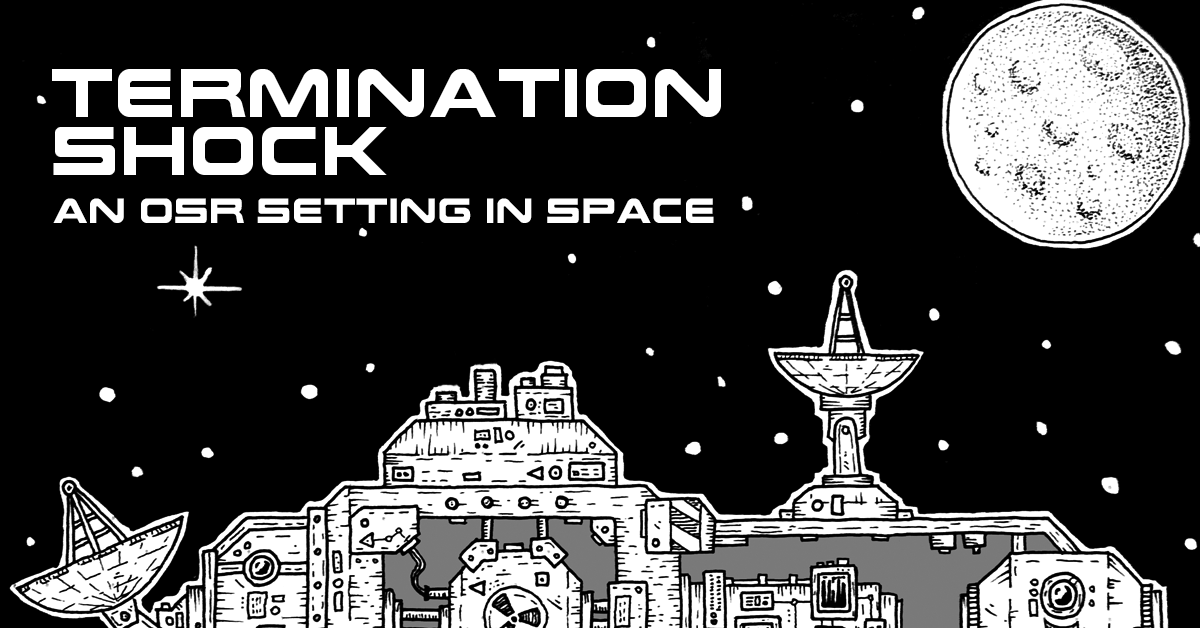 Please Note: Termination Shock is a work in progress and an ongoing project, it is updated every once in a while when I’m in the mood for. It is meant as a setting concept for Old-School Renaissance games and early versions of D&D.

Termination Shock is not about grand scale, travelling the galaxy and meeting alien civilisations. It’s about mankind’s attempts of taming the great, untamable frontier. That is not to say it’s not a grand adventure! It’s about setting off into space to repair the wreckage of our space infrastructure, and to explore how petty our first steps into the unknown are.

It’s 2114, and we are the masters of our solar system. A breakthrough in nuclear science made it possible for us to build small fusion reactors suitable to power starships, and discoveries within the field of electromagnetism led us to invent magnetic propulsion technology that could send us through space faster than ever before. Far from the warp travel of science fiction of course, but still fast enough to be able to reach the Kuiper belt at the edge of our system in a year’s travel.

We built star ports and space stations. We put permanent science outposts on Mars and on the moons of Jupiter and Saturn. We mined precious metals on Mercury and in the asteroid belts. Radio relay beacons made instant communication possible between earth and the motley armada of commercial and governmental starships setting off to explore the vast darkness of space. It is earth’s second great age of discovery, and a time where great heroes are born.

We have not yet landed on Orcus, so for sometime yet we do not know Hell.

Then all went silent and dark. A few months ago a particle storm suddenly swept through the solar system and wiped out almost all of our sensitive electrical components. The radio beacons broke, starships lost their propulsion and the heroes of mankind found themselves dead in the water, millions of kilometers from home. Earth managed quite well, the atmosphere withstood most of the storm although the inhabitants got to experience the greatest aurora borealis in the history of the planet.

Here begins our campaign. The player characters make up the crew of one of the few starships that survived the storm. They will set off into space against a backdrop of a solar system gone dark, where hundreds of drifting starships, millions of kilometers away, are either cold, floating tombs or small beacons of flickering life, their crews slumbering in life-support pods. On planets and moons and asteroids mankind’s earliest space-colonists waits to be rescued, or at least given a proper burial.

Well, no. Hundreds of starships are out there, drifting, as well as several large space stations, satellites and other constructions of mankind, but keep in mind that the solar system is almost unbelievably vast. When this campaign starts, Pluto is 7.37593 billion kilometers from Earth. The likelihood of bumping into another soul when traveling the solar system is microscopic unless you are actively trying to rendezvous. During the course of this campaign, the heroes will at times feel very small and very lonely. Space is dark, silent and often utterly terrifying.

And that’s true even before we land on Orcus.

Well, yeah. There are probably things that lurk in the darkness. There will be some insidious space goo and other scary stuff like mind-controlling bacteria. The characters might even pick up an alien radio signal hidden in the static or something similarly strange. It’s not Star Trek or Wars, though. There will be no fraternizing with intelligent, human-like alien civilizations.

Don’t land on Orcus, though. Seriously.

The things we build for space is rugged. There are no smart phones or other delicate electrical gadgets. Keyboards are mechanical and goes “clunk” when you hit the keys. Computers are built to do very specific things, we do not waste processor power on graphical interfaces or color screens if we don’t have to. Screens are black with green text.

We like nuclear energy, because it almost never needs refueling and most of the time it doesn’t explode. Our ship’s engines create magnetic fields, and we surf them at incredible speeds. We can reach Mars in weeks.
We have built weapons that can shoot rays, but most of the time we prefer things that say bang.

We have built robots to help us with menial tasks. Some of them show signs of eerie intelligence though, as if our AI-blocking protocols isn’t as safe as the manufacturer’s claim them to be.

Starships are very, very expensive. They are built and commandeered by corporations, governments and eccentric billionaire adventurers.

For the last hundred years or so, cosmic phenomenons, radiation fields and electrical storms has increased in our system, and it has made communication over vast distances much harder than it used to be. We now rely heavily on a network of radio relay satellites to facilitate transmissions between planets, stations and ships. Bandwidth is low. We cannot submit video, and images arrive distorted. Since the storm, all of these satellites needs to be repaired.

How is life on Earth?

Pretty much like it’s always been. Humans are quite often assholes to each other, and we pollute our planet. It’s not apocalyptic, but could be better. We still desire fame, money and power. The rich are very rich, and the poor are very poor. Kids in shit countries die from diseases that can be prevented. The middle class has a pretty decent life, most of the time. But little of that really matters to the players or their characters, because this campaign is not about earth. 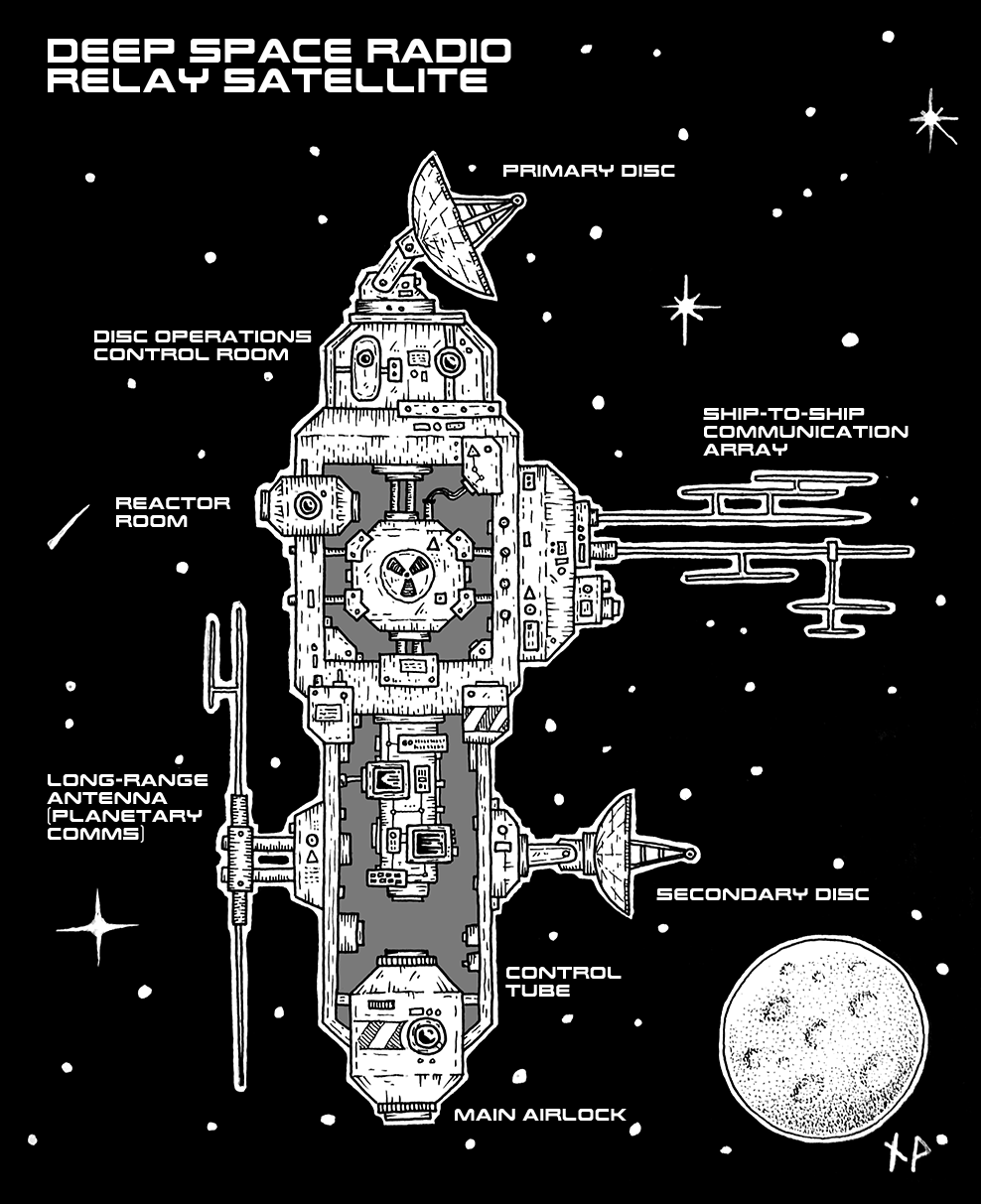 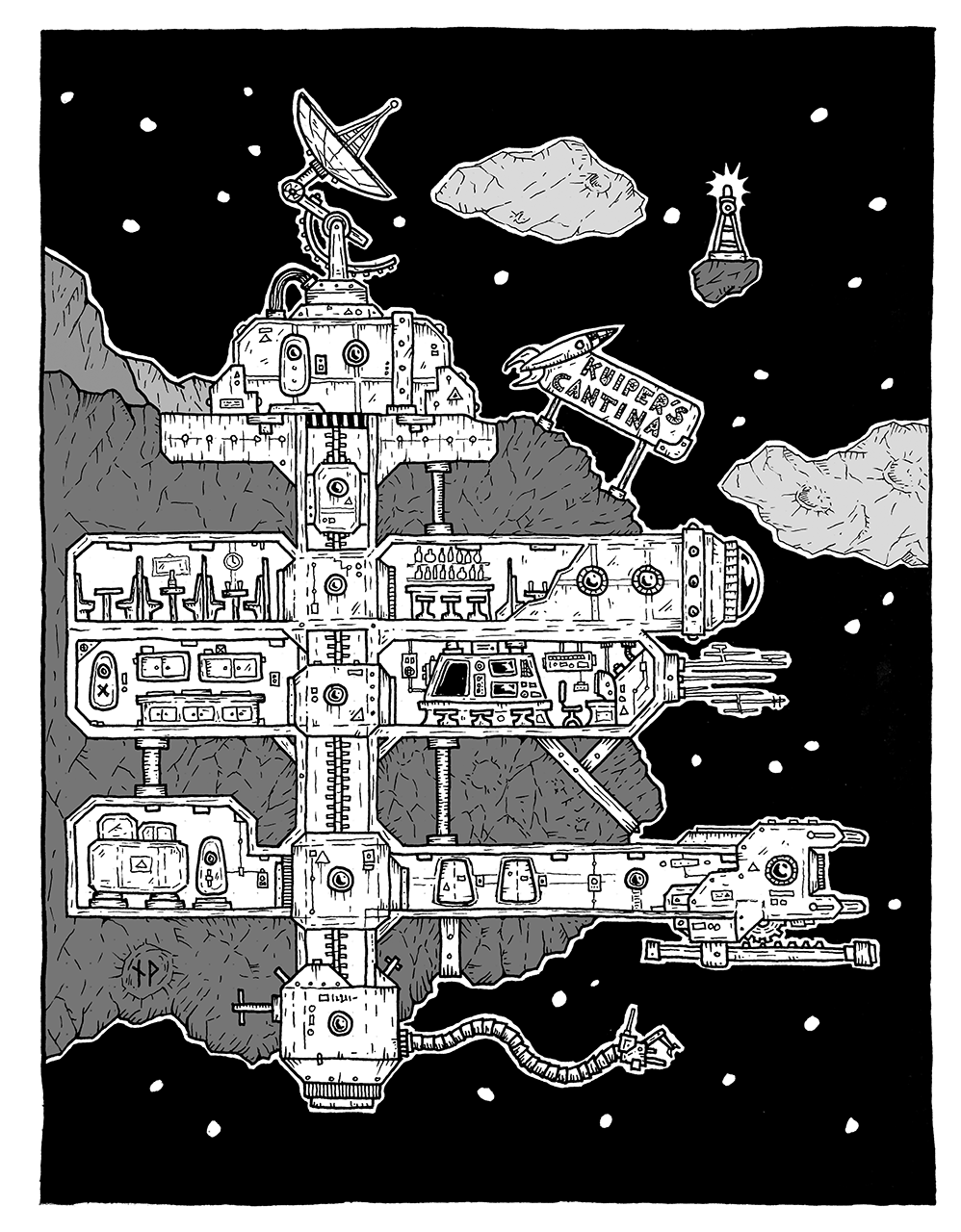 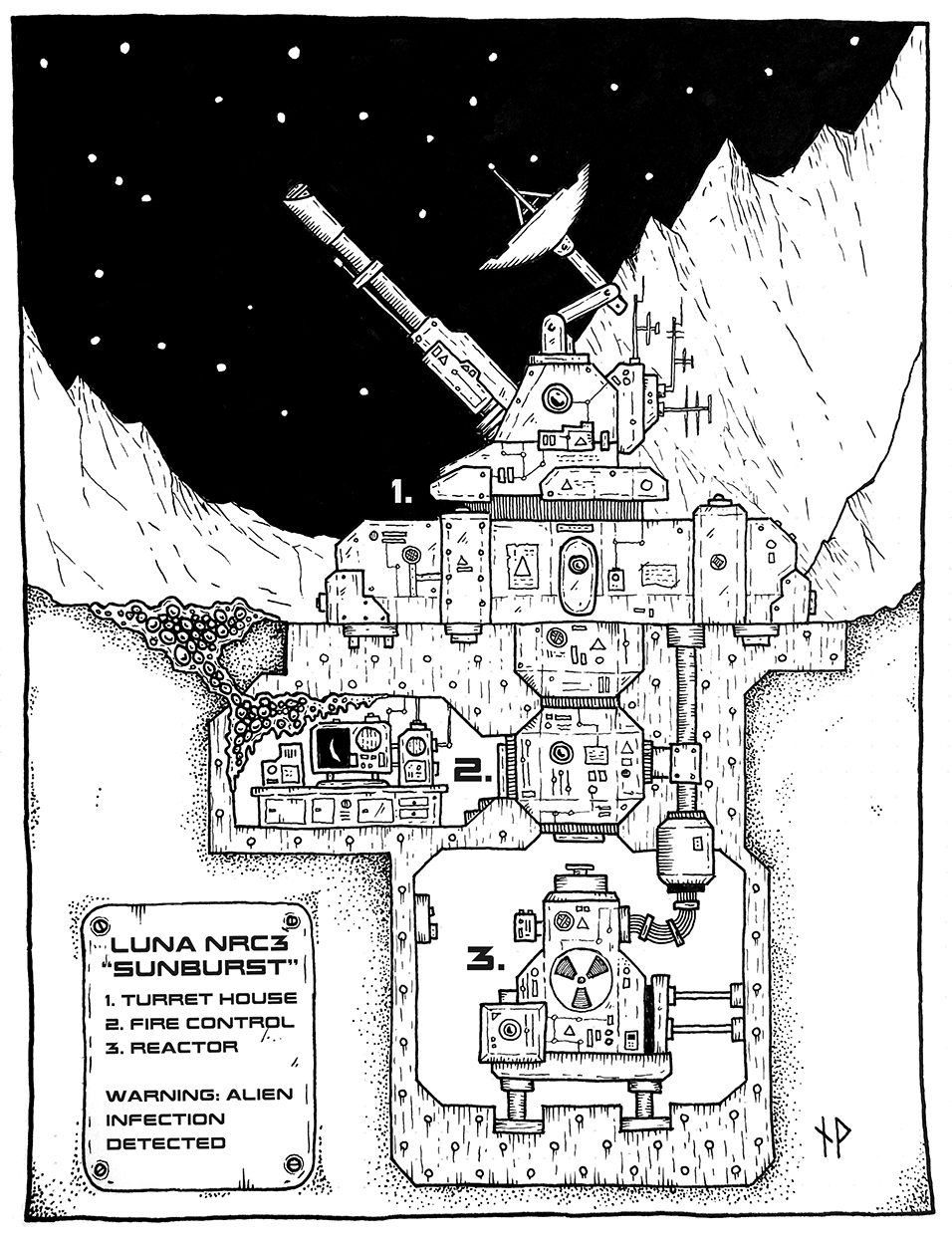 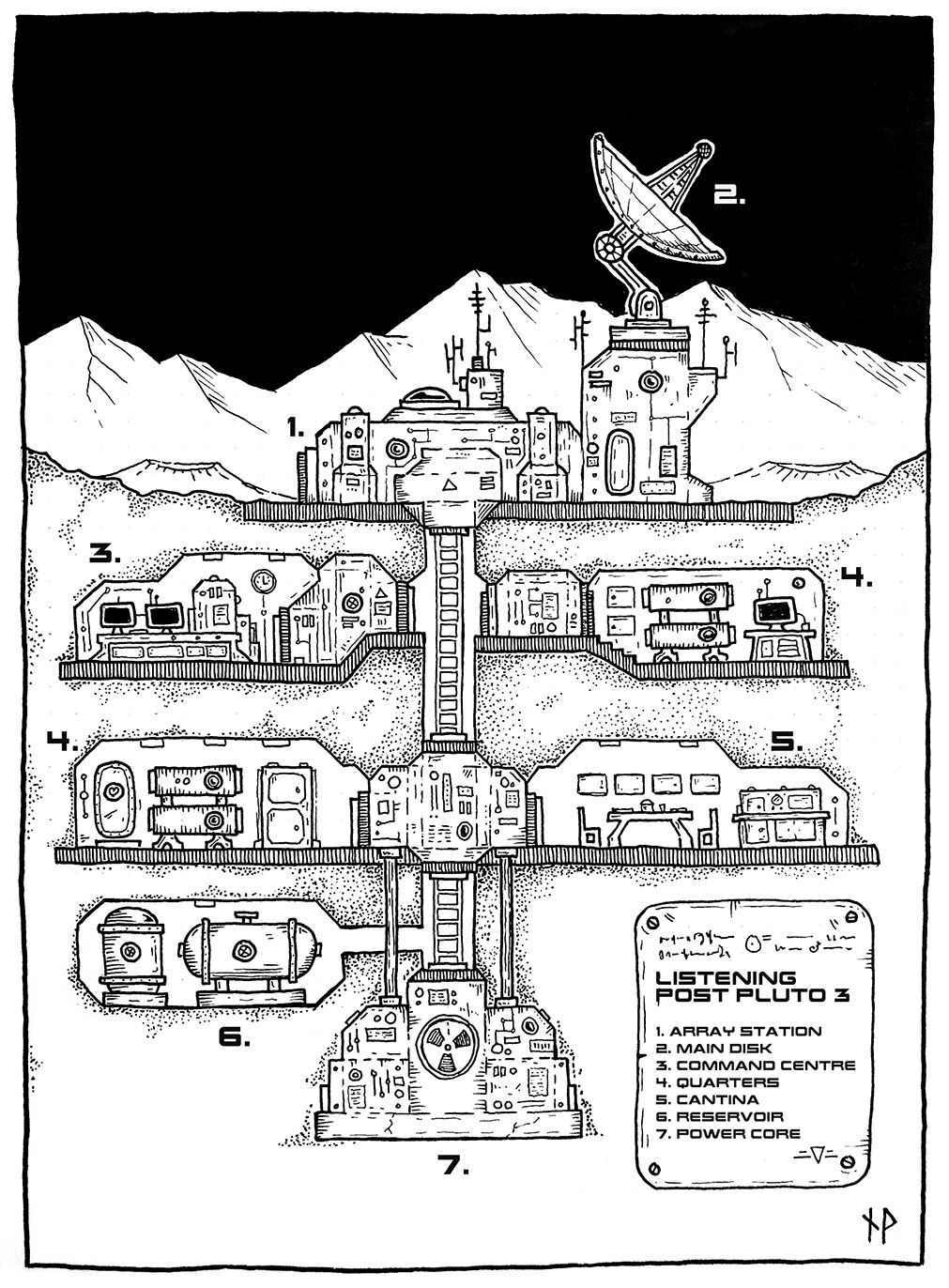 A vertical, retro sci-fi map of a listening post on a desolate planet. For use with sci-fi roleplaying games like Starfinder or Traveller.

Since the Science Outpost Thule map turned out nicely, I decided I wanted to try out another Sci-Fi map. Imagining a team of technicians manning a listening post as far away as you can get within our solar system. You can feel the isolation. Space is vast, dark and unimaginably desolate. But what if one day they hear something. One day the arrays suddenly pick up something else than the usual static? 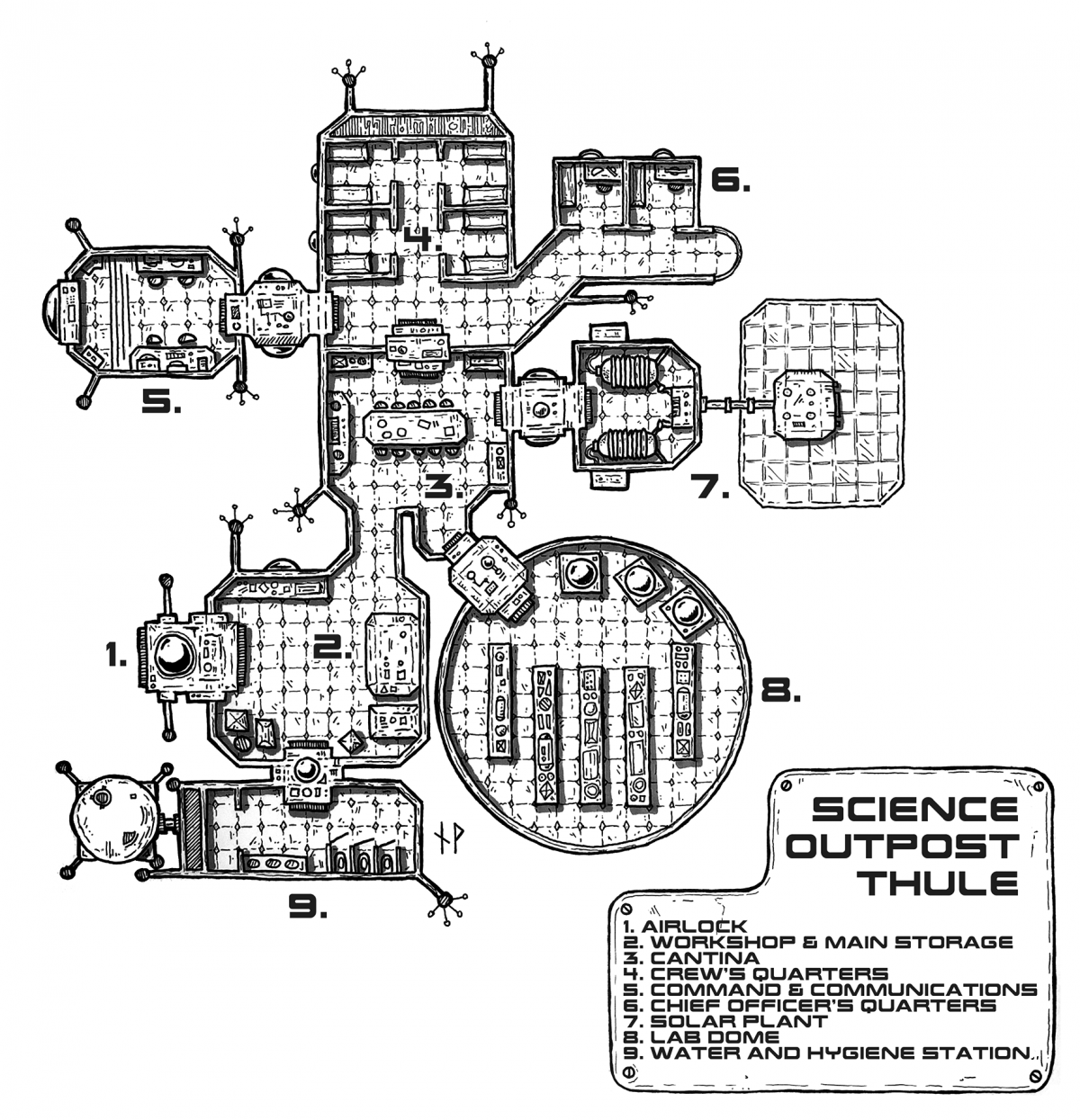 This is my first attempt at drawing sci-fi maps, and I was going for a bit of a retro style. I’m currently reading Arthur C. Clarke’s “The Sands of Mars”, and felt really inspired by this great story about a human settlement on the red planet, and the scientific experiments they conduct there.

Science Outpost Thule is located at some backwater moon in the outskirts of the solar system, and some bad shit probably happened here. Might write a short adventure based on the map. Let me know in the comments if you have any ideas!

This error message is only visible to WordPress admins